"Who is My Neighbor?"

The tone of this post is very different from that of more recent ones; the nature of grief is that one's emotional climate can and does change rapidly.  Sometimes it is hard to keep up but it is the reality of recovery from loss, betrayal or trauma.

I called my old pharmacy recently--the one I used in my former life.  I spoke with Tom, the owner of the pharmacy and as soon as I identified myself he said, "Oh, Brenda, how are you?  We've been thinking about you."  I was moved to tears by the compassion and genuine concern in his voice.  Here's what I know about Tom:  he is old and has a slight tremor in his hand, he is the owner of a mom and pop pharmacy and he still uses glass beakers in the compounding part of his store.  That's it.  But he knows me and my story because of the publicity surrounding it and he used my call about prescriptions to reach out in kindness to me.  I was overwhelmed.

That phone call reminded me of a question a young lawyer asked of a great teacher:  "Who is my neighbor?" The teacher used a parable or story to answer the question.  (You can read the story here.)  The cast of characters in the story include a victim, a band of villains, two professional men and a man considered to be "from the other side of the tracks," in that region.  The setting for the story was a treacherous road connecting the religious center of the country to a popular village on the other side of the mountain.  The route was considered dangerous because bands of thieves often ambushed solitary travelers, robbing and beating them.

Which is exactly what happened to the victim in the story.  He was robbed, beaten and left for dead along the side of the road.  But wait, there are more characters in the story--help is on the way, isn't it?  The first and then the second potential helper approaches, looks at the victim, crosses to the other side of the road and passes him by.  But the teacher points to the third potential helper as the hero in the story.  He stopped, rendered aid, transported the victim to a place of healing and paid for the injured man's care out of his personal funds.  He got involved and stayed involved until the victim recovered.  The teacher pointed to this man as a true neighbor, in answer to the lawyer's question.

A nice story with the moral being the importance of looking out for one's neighbor, right?  Yes, but there is more, so much more.  Because the victim and the uncaring professionals were from the same "neighborhood," so to speak.  The hero helper was not from their neighborhood but rather was from the despised one on the other side of town.  The injured man was ignored by his "neighbors" but helped by someone he may have avoided had he been in a condition to do so.  The great teacher turned the definition of the word "neighbor" upside down when he answered this important question.  His answer reframed the question from "If I stop to help this man, what will happen to me?" to "If I do not stop to help this man, what will happen to him?" 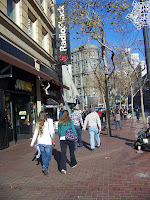 I've thought a lot about who my neighbors are during the past months of recovery. The individuals who I thought were neighbors turned out not to be so, which is a source of deep pain to me.  Former colleagues, professors, pastors and friends seemingly passed by in horror at the damage I had suffered.  I was messy and the situation I found myself in was messy--not a topic for polite conversation at a dinner party.  The kind of mess that creates a stench and makes neighbors feel ill at ease--that threatening kind of mess that we all tend to move away from.  It is costly to really be a good neighbor to someone suffering--it is a risk and you will get dirty.

To be fair, a few did immediately reach out, but this many months later, their numbers are quickly dwindling.  I find myself yearning for a "Good Samaritan" these days.  Yes the crisis has passed but the grief has not.  It comes in waves--phantom pains that remind me grimly of what has been lost.  It is exhausting.  The challenge of beginning life again after a devastating loss is overwhelming; the details that must be attended to are without end.  Have I mentioned that it is exhausting? And it is lonely, and frightening.

It is tempting to become cynical, particularly of members of my faith tradition and of those within the helping and legal professions.  It is very tempting.  And yet, I know it is a lot to ask--I know that living up to the standard of neighborliness that the great teacher set is time consuming and scarey.  It means sacrifice and it means moving out of one's comfort zone and tolerating inconvenience.  It means giving of one's resources, time and maybe even reputation. True neighborliness demands much from us and most of us just are not willing to pay the cost.

So, today I know that true neighbors are hard to come by.  Today I renew my commitment to be a Good Samaritan to those I meet or know who have been beaten up by life, robbed by opportunists and abandoned by those they trusted.  Today I recommit myself to following the great Teacher's standard for neighborliness.  To ask not "What will this cost me?" but rather "What will happen to this person if I fail to act?"Today I choose to embrace compassion, empathy and forgiveness rather than anger, resentment and cynicism.  These are my gifts in the wounds of the past months.
Posted by Brenda Finding Elysium at 11:31 AM