Cast Away at a Crossroads

Words from an old song have reverberated through my brain in recent weeks--so much so that I finally tracked down the lyrics: 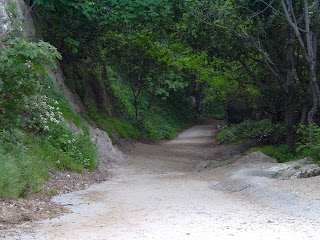 You've come walking with a scar on your soul
Taking too much too lightly.
And it is no wonder that you're feeling so cold
Shivering so politely.

You stand a looking with a hurt in your eye,
Gray in the sky above you.
You'll feel much better if you go on and cry
You've found Somebody who will love you.
(c) 1979 Mark Heard, Autumn Balm Music, BMI

A simple song with a profound message--one that completely expresses the grief of betrayal, abandonment and loss as well as the hope of recovery.  No wonder it is on a continuous loop in my mind these days!

The word "cast away" has three potential meanings:
For those of us recovering from or living within a toxic, abusive or addictive relationship, all three meanings apply.  We feel discarded and rejected by our significant other and certainly know that our life or relationship feels like a shipwreck.  And if we choose to leave or are abruptly thrown out of the relationship, we often are left without friends or resources.  We live as cast aways with scars on our souls and hurt in our eyes.  And we often are guilty of "taking too much too lightly" and "shivering so politely."  We abhor being a burden to another even in our pain and devastation. 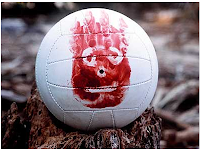 And of course, the term "cast away" calls to mind the movie by that name featuring Tom Hanks.  Tom's character, Chuck, is a time-consumed executive who is marooned on a deserted island after the plane he is flying in goes down in a storm.  Because humans are created for connection, Chuck forms an emotional tie to his only companion, a soccer ball that washes ashore from the downed plane,  who he appropriately  names "Wilson."  After four years on the island where time has little meaning, Chuck attempts an escape but in the process loses "Wilson."  Chuck is rescued and returns home only to discover that his life has also been shipwrecked and he has some choices to make.

Several themes from the movie resonate with me as I contemplate my own shipwrecked life.  First, when Chuck loses "Wilson," his grief is palpable.  "Wilson" was his only companion--the person he talked to endlessly.  This scene in the movie reflects the character's pivotal decision to let go of personal illusions in exchange for real life.  Had he held on to the illusion of "Wilson," he may have missed the cargo ship waiting to rescue him.

And so it is with recovery from a toxic relationship.  We must let go of the illusions, accept the truth and cold realities of our relationship or life before we can enter into true life and begin the process of recovery.  We discard the rose-colored glasses and look at our life or relationship through the lens of truth and reality.  It is painful for sure but essential if we are to recover.

The second scene from the movie that resonates deeply with me is the final scene.  Chuck has
returned home, discovered that his significant other has declared him dead and remarried and he is faced with a crossroads in life.  This scene was filmed in a remote area of Texas and while the landscape appears barren and incompatible with life, each road offers the potential for adventure, connection and the possibility of happiness.  The movie ends without us knowing which road Chuck chooses--a poignant reminder that his story does not end just because the movie is over.

The crossroads are a metaphor for life after loss.  And like the song, they remind me that I can find my way.  I can focus on the barrenness of the landscape, the magnitude of my loss or I can focus on the possibilities and potential available to me.  I do have choices.  While I did not choose to be a cast away--who would, right?  I do have choices about my future.  So yet again, I must remind myself that this is not the end of my story--it is just a crossroads.  I am no longer a cast away but rather an adventurer, a pioneer charting a new course for my life.
Posted by Brenda Finding Elysium at 11:40 AM