Over the past few days, the blogging world has been very active with the Josh Duggar and Karen Root Hinkley stories.  For those of us who have been impacted either by spiritual abuse and/or interaction with a pedophile, these “stories” are felt deeply and our anger is rooted in the trauma we have experienced and that we see others experiencing.  It is a deeply felt pain of identification that time and distance do not heal.  We are angry at the injustice, ignorance and our sense of impotence in the face of such evil.  It gets exhausting—anger may be an empowering emotion but it also becomes exhausting, especially when it seems that real change is elusive.

Sometimes it feels like it would be easier to just give up, bury our heads in the sand and sing a happy song.  But our anger and grief matter.  They matter a great deal and we cannot afford to be silenced on this critical issue.  It may be uncomfortable to be angry and to fully identify with the pain of others, but it is the catalyst for creating the change we want to see.  And it is critically important that change come. 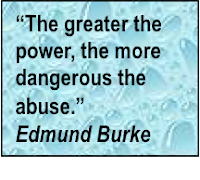 Men and women who stood against the injustices, excesses and abuses of organized religion, social norms and punitive laws made change through their activism.  They got angry and decided to do something about it.  Reformers and change agents risked personal safety, reputation and anonymity in order to draw attention to a problem and to mobilize public support for change.  None of the major battles of reformation within organized religion and society were undertaken passively—they resulted from a burning anger at injustice and a commitment to do something to force change.

Our anger and subsequent activism matter; they matter a great deal.  Organized religion must change its approach to women and children and it must change its perspective on pedophiles. And we must channel our anger into positive action until change comes.  Our activism matters because:
The greatest tragedy that could possibly come from these two horrific stories (and all the other untold ones we have yet to hear about) would be if we allow ourselves to forget, to become distracted and to turn from the battle that we now see clearly.  The time for change has come.  If you and I do not take up the challenge, who will?  If not now, then when?  If not us, then who?