I have not said much lately about my "qualifier" (a kinder word for the perpetrator I was married to).  Earlier this year, he violated the conditions of his probation and now sits in prison.  As a former volunteer behind bars, I had inside information on the kind of treatment child offenders receive when incarcerated.  After I learned of his foray into the dark world of child pornography, we had many "discussions" where I painted the consequence of his continued pursuit in vivid language.   He called me "paranoid" then but is now living in some pretty horrendous conditions, as I predicted.

Anyone who has been in a relationship with an addict has experienced the blame, projection, minimization, exaggeration and denial that is common to addiction, and particularly so when dealing with a narcissist.  (One therapist that I worked with asserts that she has yet to meet an addict who is not also a narcissist).  You would think that when you are caught with your hand in the proverbial cookie jar, there would be little recourse except to acknowledge your guilt and accept your punishment.  That is not what I am experiencing and after speaking with many women who have had the same misfortune of marrying a pedophile, I find that my experience is not unique.

As I did after my ex's first trial, I purchased the court transcripts from his most recent trial and received them a few months ago.  It has been enlightening and sobering to read once again the case against him, particularly the ways he "storied" his probation violation.  One paragraph in the transcript stood out to me and the words continue to reverberate in my head and are validated by past and current experiences with my qualifier.  Quoting  a clinical psychologist who treated my ex for nearly four years, the prosecutor said, "This defendant has an inordinately difficult time accepting responsibility for his behavior.  He constantly blames his [ex]wife for his offense . . . feeling that if she had been more supportive of him, he wouldn't have had to look at child pornography."  His probation officer testified about his violation in great detail (no children were directly harmed, thank God) and the prosecutor illustrated how the defendant's story about the violation changed, depending on who he was talking to.  Court transcripts are incredibly valuable, particularly when dealing with an addict/narcissist who uses a lot of gaslighting.  They are the stake in the ground that becomes unmovable and grounding when communication becomes murky and confusing.

Letters from prison have been arriving--letters that are deeply disturbing and hurtful, far more desperate than previous ones.  The latest, addressed to one of my children, includes 20 pages of hate and blame towards me.  The specifics do not merit inclusion here but once again, those court transcripts are the anchor in the swirl of blame-shifting, denial and deception.  As my friend, "Eve" discovered, the man I thought I married does not exist and never did.  He was an illusion and I was simply a prop in his elaborate scheme to hide his secret nature.  Eve and I had a conversation recently about the difficulty in removing those rose-colored glasses and accepting the truth about our former partners, a conversation I vividly remembered when reading those letters! 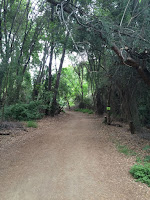 My ex made it clear in his letters that he does not like the fact that this blog exists and consequently I have questioned my motives in continuing to write about my experience.  While he thinks that my writing is all about him, it is really about my recovery from betrayal and trauma; he is central to my wounding but irrelevant to my recovery.  I regularly hear from women just like me who somehow discover this space on the internet and find hope in the knowledge that they are not alone.  There is risk and vulnerability in writing of such personal experiences but there is also freedom in speaking the truth rather than continuing to hide.

So the lessons I have learned from reading and re-reading court transcripts and letters from prison can be summarized by the following:
How about you?  Has your experience been similar or different to what I have described?   As always, I would love to hear from you.
Posted by Brenda Finding Elysium at 4:54 AM