Two years ago today the front door of the home I shared with my husband of 32 years, and our young adult daughter, was broken down by the police executing a search warrant.  The day after the raid, the police returned and arrested my husband.  He spent 34 days in jail and bonded out with the aid of his sister, much to our surprise.

For two years he has wrangled with the criminal justice system.  For two years he has evaded, blamed, denied, minimized, rationalized, deceived and manipulated.  He has sought pity, pseudo-forgiveness, and has acted as the victim in this horrible situation that he brought on himself, his family, his friends and his employer.  For two years--two very long years.  But this week, time ran out on his delaying strategies.  This week, he stood before the judge and was sentenced to prison.

In English Grammar, I learned that a correctly constructed sentence must have a noun, a verb, maybe some adverbs and adjectives with some prepositions and conjunctions thrown in just to make things interesting.  Every sentence must end with appropriate punctuation.  I know what type of punctuation belongs at the end of this sentence, but what goes at the end of the sentence handed down in the courtroom this week?

A period indicates the end of a statement; an exclamation point adds an umph for emphasis and a question mark lets the reader know that the writer is asking a question.  I guess all three forms of punctuation belong at the end of the judge's sentence.

Certainly his sentence ends the statement of my ex's guilt.  He admitted guilt in a sweet plea deal; in exchange, the Prosecutor dropped six other charges.  So the statement of his guilt has been concluded.  And he was sentenced!  He did not get a slap on the wrist, as he expected.  He is facing a very difficult time in a maximum security prison.  He was facing 49 years had he been convicted on all 7 charges and he would have been required to serve the sentences consecutively rather than concurrently.  42 months is nothing compared to 49 years, but it is a sentence and is deserving of an exclamation point!

But the judge's sentence also begs a question mark as the appropriate punctuation.  A sentence?  Really??  How can 42 months possibly be enough time for the depth of degradation he had reached?  And now that he is imprisoned, what next?  This sentence does not mean that our family tragedy has ended; it has simply begun a new phase.  And we do not know how this phase will end either.  Lots of questions with no firm answers, and questions demand a question mark, right?

"When you look at the defendant, you would be completely justified in asking how someone like him ended up here," the Prosecutor said.  "Apparently, very few people knew the real Joe Smith."  As his wife, I spent 406 months married to Joe Smith and most of that time, I knew nothing about his secret.  So I would argue that no one knew the real Mr. Smith, absolutely no one.  406 vs. 42--not a real fair arrangement, is it?  Another question. 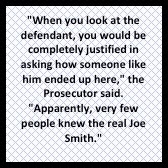 And what about the children he sexually offended, both actively through molestation and passively by using pictures of the worst day of their life for his own sexual gratification?  How much time is sufficient to wipe away the lifetime of pain to which his actions sentenced them?  Does enough time even exist to accomplish this?

So, we have ended the Sentence with a period, an exclamation point and questions marks.  If it sounds confusing, welcome to our world.  Somehow we will go on.  Somehow we will continue rebuilding, healing and growing.  Because his Sentence is not ours; the end of his criminal case is not the end of my story or that of my sweet little family.  His Sentence belongs to him and he alone will serve it.
Posted by Brenda Finding Elysium at 4:00 PM