This is my 100th blog post!  While I had planned a different sort of post for this milestone, I think this is appropriate.  Thanks for journeying with me on this road to healing and activism.
Thirty days hath September
April, June and November;
All the rest have thirty-one,
Excepting February alone
Which hath but twenty-eight, in fine,
Till leap year gives it twenty-nine.

In the quest to keep our calendar year synchronized with the astronomical and seasonal year, an extra day is added to February once every four years.  Adding a day to the year is a corrective measure since the earth does not orbit around the sun in exactly 365 days.  A number of superstitions and traditions surround this four-year phenomenon, including: 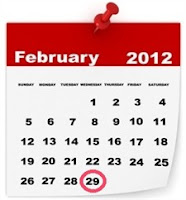 The last leap year was in 2012 and it was on February 29, 2012 that my life was drastically and dramatically altered.  Before the sun was completely awake that cold winter morning, the police broke down the door of the house I shared with my daughter and now ex-husband in their quest to serve a search warrant.  They had been investigating my former spouse for a number of months, documenting each time he downloaded child pornography.

There are things I will never forget about that morning:

These are the things I will forever associate with leap year, specifically leap day.

In a technical sense, one could argue that today is the first anniversary of our world explosion day but I'm glad I am further down the road of recovery now than I would have been one year after that fateful morning.  This blog has been part of my solitary healing journey; it has provided a venue for processing what happened to me.  And it has proven that even the most heinous pain can be redeemed.  I have seen that redemption process in the many women who contact me or leave comments because they are in a similar life explosion.

February 29, 2012 was a pivot day for me.  It was preceded by 33 years of marriage to a man who had a secret identity but who worked hard to create an illusionary facade as a successful family man and professional.  The days that followed were filled with trauma, betrayal and scandal.  This event did not begin and end on that 366th day of 2012 and while we are healing, it will always be the defining day in our family history.

My story is not just about a marriage that went south or a husband who misbehaved and was caught.  It is also about organized religion's failure to respond appropriately, colluding therapists, the criminal justice system's zeal and then compromise and society's discomfort with the fact that predators do not fit the comfortable caricature we have created for them.  My story is not an anomaly, unfortunately.  The major systems involved have fatal flaws in them when it comes to really protecting, supporting and defending victims, including secondary ones, against predators.

As I reflect today on that event four years ago, I grieve.  I grieve that while much as changed in my personal life, little has changed in our societal response to predators.  I grieve that so many other families are experiencing their own world explosion days silently and with little or no support.  I grieve that very few are willing to get in the cesspool of pedophilia and addiction with wounded and betrayed partners and children.  It is lonely and frightening, stinky and messy--not a suitable place for good, law-abiding, church-going citizens.  I grieve that so many of these cases seem to be occurring in churches and that the response is often exactly that of the predator--minimize, deny, rationalize and deceive.  I grieve for the women who are made to feel responsible for their husbands' deviancy, for the innocent children impacted either directly by the molestation of the predator or by his betrayal of trust as their father, or both.  I grieve and I truly believe that Jesus grieves as well.

When will we get it right?  There is too much at stake to keep hiding our heads in the sand--too many lives are being decimated.  Our children are vulnerable--not just in leap year but every day of every year.  We need a multi-pronged approach to this insidious problem and that must include the predator's partner and his children.  It is time, way past time.
Posted by Brenda Finding Elysium at 4:50 AM