My father died near the end of 2020 and my mother's grief was incalculable.  When she lost him, her will to live died and was buried with him.  They spent 66 contentious years together in a marriage marked by anger, recrimination, and abuse.  She married my dad when she was 15 and was so conditioned to the dysfunction and violence of their relationship that she did not know what to do without it.  She died ten months to the day after his death,

Patrick Carnes coined the phrase "betrayal bond," to describe the relationship between someone who experiences trauma at the hands of a trusted other and the perpetrator.  The term is used to describe the negative bond and strong attachment that develops between an abused person and their abuser or between an individual and a toxic system or process that is harmful to them.  A betrayal bond can be very difficult to break free from because the experience with the toxic person or system is not continually negative--there are kindnesses or positive aspects to the relationship.  My mom certainly had a betrayal bond to my dad and the toxic system they created.

My siblings and I were not immune to the toxicity of my parents' marriage and all four of us became trauma-bonded to the process and to them. The system demanded that we choose sides between our parents.  Allegiances were drawn based on who we supported at any given point in time.  After dad's death there was hope that the system could be destroyed but the patterns of behavior were too entrenched.  By the time my mother died, all hope of vanquishing the toxic process was gone and I found myself standing alone after my siblings made hurtful and destructive decisions.  Thankfully, years of therapy had helped me to break my own trauma bonds but her funeral was still shocking and shameful.  Unfortunately the estrangements between my siblings and I continues unabated. 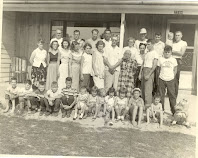 Mom was the youngest in her large family as well as the youngest of dad's siblings; she was the last woman standing in both families.  She was the end of an era--the last of her generation.  She often spoke of her intense loneliness, lamenting "they all left me."  I understood what she was saying but simply could not reframe it to her satisfaction. She had children, grandchildren, great-grandchildren along with nieces, nephews and friends.  But she was so lonely.  In spite of the best support we could provide, she felt abandoned by those of her generation who preceded her in death.

While I am grateful to no longer be the prisoner of a toxic system, I confess to a level of loneliness and like my mother, lament the loss of sibling relationships.  It is a bittersweet experience--gratitude for freedom, and grief that I am left alone.  I do not think these competing emotions are exclusive or unique to me.  Freedom often creates loss, and we grieve.  Freedom and loss are really two sides of the same coin.  I'm reminded of Harriet Tubman's urging escaping slaves to keep going, no matter how frightening or dangerous their journey. Her message is appropriate to those of us running away from toxic or hurtful relationships:  "If you hear the dogs, keep going.  If you see the torches in the woods, keep going. Don't ever stop.  Keep going.  If you want a taste of freedom, keep going."

To my readers:  it has been a while since I have paid attention to this blog and for that, I apologize. Life has been busy with a move to the Pacific Northwest, which entailed a new job, house and lifestyle.  Oh, and we did have a pandemic, which disrupted much of life for all of us.  I’m happy to be back and with my impending retirement from full-time employment, look forward to being more active in the things I care deeply about. Thanks for reading and commenting on this blog--I really appreciate it.

Two years ago this month, life as we knew it ended.  A virus that originated in a lab in China swept the globe, killing over six million people worldwide, to date.  “Normal” disappeared and we were forced to adapt to life during a global pandemic. We wore masks, went to school and work from home, streamed a lot of TV, disinfected everything and became reacquainted with our homes and families.  We were isolated, stressed and anxious and many of us lost loved ones and were not even able to say a proper goodbye or celebrate their lives with our community.  We are cautiously optimistic that the pandemic is nearly over, although there always seems to be another variant that could create another surge and further restrictions in order to contain it.

There is a four-letter word that completely describes what the world community has experienced over the past two years: LOSS.  Loss is almost always unexpected and intrudes itself into our lives in many forms—betrayal by a loved one, illness, financial difficulties, a global pandemic, war, death—to name a few.  So, what do we know about this dreaded four-letter word?

Loss is grievous:  when we lose someone or something, we grieve, we lament. To “lament” simply means that we cry out in grief over the thing/person that was lost.  It is our legitimate reaction to the sudden absence of someone or something that was dear to us.  But some of us fear grief—we just want to pretend that we are not saddened when we are deprived of someone or something dear, so we gloss over it, stuff it or simply refuse to acknowledge the loss.  Failure to process through a loss will compound our reaction to future losses—ungrieved losses stack up and will accompany any new losses we may experience.

Loss changes everything:  whatever form loss takes, it will change everything in our life, whether we want it to or not.  It does not ask our permission before it marches in and disrupts our lives.  Both of my parents died within ten months of each other during the pandemic (though not from Covid).  No one can be fully prepared for the experience of losing one’s parent(s) until it happens.  It changes the rhythm of family interactions (no more morning talks with mom while commuting to work), our relationship with our past and creates a vulnerability for our future.  We suddenly become the next generation likely to die—the layer of protection from death that we foolishly believe our parents provided is gone.  Any opportunity to resolve conflicts, get vital health or family history or have just one more conversation is permanently gone. 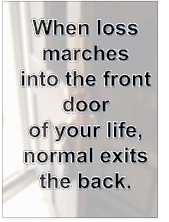 Loss disrupts “normal” if there is such a thing.  We are creatures of habit—most of us enjoy the familiarity of our daily routines, we feel secure when life hums along as we believe it should.  When loss marches into the front door of our lives, “normal” exits through the back.  We are forced to grieve the original loss along with the loss of life as we knew it.  The pandemic certainly changed everything that was normal in our lives--the way we worked, shopped, socialized, worshiped, vacationed, dated and even how we conducted funerals. Covid caused us to fear each other and to distance ourselves (quarantine as well as maintaining a safe distance) at a time when we most needed each other, when we desperately needed the comfort of human touch or human presence.  My uncle died from Covid and like so many others who succumbed to this dreaded disease, he died alone in an intensive care unit hooked up to machines.  There is nothing “normal” about that!
Loss forces us to reevaluate our priorities:  have you heard about the Great Resignation?  Many in the workforce decided to either change careers or drastically change the way they participate in the workforce as a consequence of the pandemic.  Some of us loved working from home and cherished the additional personal time that not commuting provided.  Parents spent more time with their children (although juggling remote work and online school has been chaotic for many) and discovered that they enjoyed having more family time.  After the death of my parents and my return to in-person work, I realized that my priorities had shifted.  I’m having a very significant birthday this month and now knowing how my parents died and how old they were at the time of their death gives me a glimpse of what my future might look like.  How do I want to spend the remaining time I have on this planet?  What do I want to contribute or what brings me joy?  What do I need to change now as a result of the losses I have experienced?

Loss brings opportunities:  If you have read much in this blog, you know a bit about my story.  When  my marriage exploded in scandal, arrest, and the diagnosis of pedophilia, the grief and terror were real.  But this huge relationship loss presented opportunities for growth and changes that I could not even dream about while still tied to a perpetrator.  My life has expanded in so many amazing ways.  I have been given the opportunity to journey a bit with other partners who are struggling with their own losses, I have remarried and cherish a companion to journey with me, my family has expanded and I delight in three little girls who have captivated my heart, my kids are doing well and we regularly enjoy wonderful family times together.  None of these good things would have happened had I not experienced the loss of my first marriage.More than anything, however, loss teaches us that we need each other.  The pandemic kept us from one another in tangible ways but we found ways to stay connected and my hope is that we will continue to look for healthy ways to connect, to support and to love one another as we embrace the numerous losses we have all experienced together—our common trauma. May we focus on what unites us rather than what divides and may we see and cherish our common humanity.
Posted by Brenda Finding Elysium at 10:08 AM No comments: