The Art of Grieving

Someone recently asked me to elaborate on the importance of fully grieving any loss, particularly those associated with having been married to a perpetrator.  I was intrigued by her description of the grief process as an art.  Images of artists painting a masterpiece or fashioning a pot of clay sprang to mind.  Art, I've learned, is a messy process--paint splatters and drips, clay hardens under fingernails and clings to any surface it comes into contact with.  And like art, grief is unpredictable, time consuming and messy.

The inspiration for creative artistic expression does not appear on command but rather comes when the time is right--when the muse strikes.  We've all heard of the writer with writer's block and I assume the same phenomenon happens with other artists.  And so it is with grief--we cannot orchestrate when it will arrive--like the wave crashing onto the shore, it comes in and threatens our sense of stability and balance.  It does not come on our schedule so often catches us by surprise.  But grief, like the wave, ebbs and flows.  When it floods into our hearts and minds, we remember that it does not come to stay, it will flow out into the deep once again. 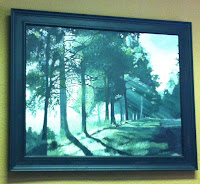 Artistic masterpieces take time to create.  It took Michelangelo fifty-four months to paint the ceiling of the Sistine Chapel.  It was a huge investment of time and yet his work is still revered and admired today.  To fully grieve a loss, we must be willing to invest the time necessary to grieve.  Too many of us are so uncomfortable with grief work that we try to shortchange the work--stuff the pain, deny or minimize it.  We prefer to complete a simple paint-by-number piece rather than invest the time and allow grief to create the masterpiece it is capable of creating in our life.  Losses that are not fully grieved come back to haunt us when we encounter a future loss.  Like the stubborn clay that sticks to everything it comes into contact with, the pain of our unresolved or ungrieved losses come along for the ride when a new loss is incurred.

Have you ever envied the person who can cry gracefully?  Dainty tears streak down a face without gathering makeup or mascara, eyes do not grow puffy nor does the face become red and splotchy.  This is not me!  There is nothing dainty or neat about my appearance when I have been crying.  I am a mess.  The work of grieving is messy.  It is not linear, circular or logical.  It just is.  We often cycle back through the same phase again and again.  There is no right or wrong way to do the work of grief, it simply must be done.  Friends and family may be uncomfortable with the messiness of our grief; they may urge us to "just get over it" and we soon learn that not all help offered is helpful.

So what are the guidelines that can help us during a season of grief?  Here are some things that have been helpful for me:
The Japanese, it turns out, have discovered a perfect artistic expression that illustrates the art of grieving.  Valuable ceramics that have been broken are repaired using a resin with gold powder in it.  One artisan puts it this way "Many Japanese have come to cherish the imperfection of a broken pot repaired in this way, seeing it as a creative addition and/or re-birth to the pot's life story. . . when something has suffered damage and has a history, it becomes more beautiful:  SOURCE

We all experience times of breaking, losses that shatter our lives, hopes, dreams and aspirations.  Allowing the art of grieving to work its way into the jagged edges of our breaking can create a far more beautiful masterpiece of our lives that we were before the shattering, a stunningly beautiful new work of art!
Posted by Brenda Finding Elysium at 5:48 AM No comments:

For Better or Worse: Really?

After nearly four decades, I can still remember making these promises to my ex-husband:

For better or worse,
For richer or poorer,
In sickness and in health,
To love and to cherish,
Til death do us part.

While the vows seemed to encompass all of the possibilities that life can bring--wealth, poverty, sickness, health, good times and bad times--they don't really address what happens to a marriage when pedophilia is present.  Maybe the last line should be amended to read "Til death or pedophilia do us part."  How many brides would agree to that promise?

Aside from the very serious implications of criminal behavior towards a child, pedophilia impacts every facet of the relationship, even if miraculously the pedophilia is contained and no illegal activities take place.  I recently described it this way:

Here's what I know about child pornography or pedophilia from a personal and professional perspective.  It is progressive--what titillates and excites today won't work tomorrow so more graphic material must be found.  It is all-consuming--it will demand more and more of his time and energy.  It requires secrecy and hiding, which will spill over into all of his relationships.  Even when he seems to be present to you and your children, he isn't completely--his mind is absorbed with maintaining his secret life or reliving what he has watched or viewed.  It will eventually render him incapable of normal relationships and work productivity.  One day he will be caught and you and your children may be in harm's way when that occurs.

If I could give advice to that pregnant 23 year old who was me when I first learned of my ex's behavior, I would say "Run!"  I am remarried and the layers of grief and pain that are now healing are rooted in my marriage to a man who was and is a fake.  I have over three decades of junk to heal from--times when I was blamed and accepted the blame for his criminal behavior, times when I felt less than as a woman and wife because I could not satisfy him after I "grew up."  I still struggle with disrupted sleep because I learned as a 23 year old to stay alert during my sleep to the potential cry from one of my children.  I struggle with trust and with shame  I struggle with fear and anxiety.  I live waiting for the other shoe to drop.  I live with trauma responses.

I went on to note that pedophiles have a different relationship to truth than do most people.  The deceptions inherent in living a life of secrecy and of hiding your true self, colors every day and impacts every facet of a marriage.  My ex and I once spent days, if not weeks, arguing about what constituted a lie.  For most of us, this is pretty straightforward and simple--a lie is something that is intended to deceive.  My ex argued that it was not a lie if it could be construed to be technically true, though the intent was to deceive.  It was maddening!  But for someone whose entire life was a lie, his definition didn't seem too important or too big a stretch for him.

Trust is foundational to the living out of those vows and if trust is broken, the vows have been broken.  It is astounding how easy it is for some perpetrators to discard those vows and see them as meaningless.  They never became meaningless to me but I was dumbfounded to discover how little my ex-husband thought of them.  Maybe they were never meaningful to him in the first place.  I don't know.

If marriage is based on promises that are made between two people, and one of the individuals has no intention of keeping the promises, is it a marriage? Is it possible for a pedophile who is intent on hiding his true self from his partner, to honestly make such promises?

On the anniversary of my divorce, I can truly say that pedophilia brought the worst of times and left me below the poverty line.  The actions of a very sick man who was unable to love or cherish anyone other than himself destroyed all that I thought we had built together.  So death would have been an easier separation than this.
Posted by Brenda Finding Elysium at 7:34 AM 3 comments: