Is it Well with my Soul?

I was reminded recently of the story behind my all-time favorite hymn and want to digress today from my normal blog posts to explore the story behind the story.  I believe that story has something to offer to those of us who have been terribly wounded by organized religion.  Horotio Spafford was a successful Chicago attorney and real estate mogul during the mid to late 1800s.  He and his wife, Anna, were members of a well-known church in the Chicago area.  In 1870, the Spaffords only son died of scarlet fever and then during the fire of 1871, Mr. Spafford lost much of his real estate holdings.

Because of the difficulties the family experienced in 1870 and 1871, the Spaffords decided that an extended European vacation was in order.  So they booked passage to England.  Just prior to their departure, however, Mr. Spafford was detained in the city on business but sent Anna and their four daughters on ahead of him.  On November 2, 1872, the ship that Mrs. Spafford and her children were on collided with another ship and sank within twelve minutes.  All four of the Spafford daughters died.  Mrs. Spafford was saved because a plank floated under her and kept her unconscious body from sinking in the cold Atlantic.  Her last memory of her daughters was of her baby being torn from her arms by the cold rushing water.  When she reached England, Anna sent a telegram to her husband stating, "Saved alone.  What shall I do?" 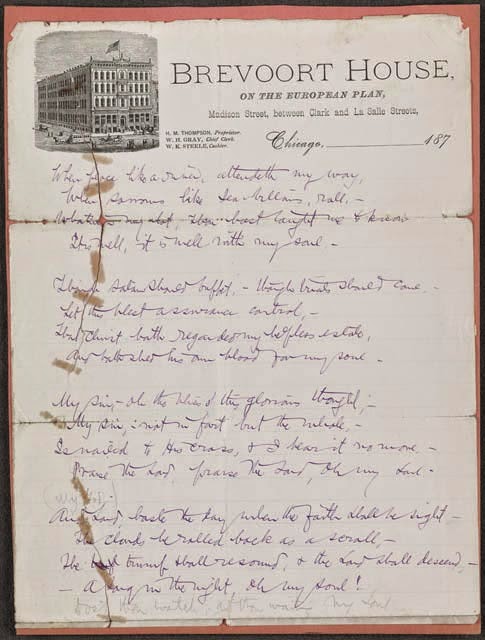 Horotio immediately boarded a ship sailing for England to be with his wife but asked the ship's captain to let him know when they were near the spot where his children had perished.  When the captain brought him to the deck as the ship neared the site of the wreckage, he informed Mr. Spafford that the water was at least three miles deep.  After contemplating his daughters' watery grave, Horotio went back to his cabin and penned the words to this well-loved hymn.

This part of the tragic story is somewhat familiar to most regular church-goers.  Many sermons have been preached on the courage and strength that Horotio drew upon to overcome unfathomable tragedy.  What is not as familiar, however, is the reaction of the Spaffords' church to their overwhelming loss.  Church elders believed that the tragedies had befallen the Spaffords due to secret sin and according to the church dogma, the children could not have gone to heaven.  At a time when comfort from their community of faith was most needed, the Spaffords experienced rejection, blame and were eventually expelled from the church.  Friends who supported them were expelled as well and it became a media scandal.  Ummm, sounds a bit familiar. 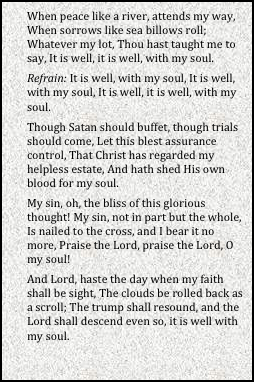 A daughter born after the tragedy later wrote about the family's life prior to 1872, "In Chicago, Father searched his life for explanation. Until now, it had flowed gently as a river.  Spiritual peace and worldly security had sustained his early years, his family life and his home.  All around him people were asking the unvoiced question, 'What guilt had brought this sweeping tragedy to Anna and Horotio Spafford?' Father became convinced that God was kind and that he would see his children again in heaven.  This thought calmed his heart but it was to bring Father into open conflict with what was then the Christian world." Source

It seems the notion of churches killing their wounded is not new nor is the tendency to blame victims of horrendous tragedy.  Expulsion, banning, finger-pointing and abusive "church discipline" are not new ideas, unfortunately.  I don't know how the Spaffords reconciled themselves to the rejection they experienced by their religious community; I don't know quite how any of us do.  My hope is that Horotio and Anna found peace in the arms of their Shepherd, even if they didn't in their church.

I am encouraged by the communities that are springing up of disenfranchised former church attenders.  They are leaving organized religion because of abuses much like the Staffords experienced and they are finding each other.  They are banding together to heal, to encourage and to reform a system that has become unbelievably corrupt and dysfunctional.  I am privileged to be part of that group of people so can truly affirm that it is well with my soul.