An Arrest is an Act of Violence

An arrest is a violent thing--by virtue of the power that we the people invest in the government, agents of the law are permitted to forcefully detain an individual, to restrain or restrict their freedom--it is an allowable violence.  The fear of arrest keeps most of us in line--we obey the law of the land precisely because we fear the consequences if we don't.

When an arrest occurs, an individual's day and life comes to a violent stop.  One minute they are going about their business--be it legal or illegal--and the next they are being placed in handcuffs, forced into a squad car and carted off to jail.  They are deprived of freedom to come and go as they please and unwillingly enter the dark and frightening world of the US legal system.

For the victim of a crime, the criminal's arrest is a good thing--it means that they can feel safer and hopefully find justice for the wrong committed against them.

But for the family of the individual arrested, it is a far different story.  It is a violent thing, a very violent thing.

As a volunteer in correctional facilities, I have seen many individuals walk through the sally port of the jail in handcuffs to be processed into the facility.  I have witnessed their questioning, examination by the medical staff, and interminable wait for the intake to be completed--crowded into a small cell with 20 to 30 other inmates, forced to sit on cold, hard benches, pee or defecate in full view of others, and finally be led away to shower and change into their prison or jail uniform.  This was all very familiar to me--what happens on the correctional facility side of things after the arrest.  But I had never witnessed an arrest occur until it happened in the foyer of my home. 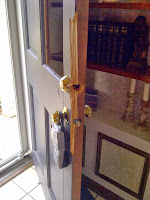 Barely 24 hours after breaking down the front door to my home and executing a search warrant/raid, detectives returned for the target of their investigation--my soon-to-be ex-husband.  They called me first and ordered me to open the door, which I quickly did.  I didn't want them to force it down yet again.  My soon-to-be ex was in his office trying to assemble another computer from spare parts since the police had confiscated all of his working computers the day before.  The detectives quickly went down the hall and escorted him to the foyer, where my daughter and I stood in shock.

As they placed the handcuffs on his wrists and informed him that he was under arrest, all I could think about was the fact that he had no shoes on.  They were going to take him to jail without shoes.  As my daughter wailed, he maintained his composure and silence.  She hugged him and then they were gone.  Just like that.  One minute he was assembling a computer and the next, life had taken a dreadful turn.

I have been haunted in recent days by the memory of that arrest.  After all that has happened since that day, it still sometimes seems inconceivable to me that my ex-husband was actually arrested--that I witnessed it--that it happened in our home, in our family, in our marriage.  Things like this happen to other people, not to people like me.

Today my daughter had to help a mother explain to her children that their father was going away for a very long time because he had done something bad.  Her tears mingled with theirs because their story is simply too close to her own.  A dad, a husband, or maybe a wife or mother is arrested.  They are there one minute and gone the next.  It is is hard for my adult brain to comprehend this act of violence, how much more difficult for a young child?  An arrest, while often necessary, is a violent thing, a very violent thing.  And when it invades a home and a family, it creates unimagined trauma and pain.  Simply unimaginable.
Posted by Brenda Finding Elysium at 6:35 PM